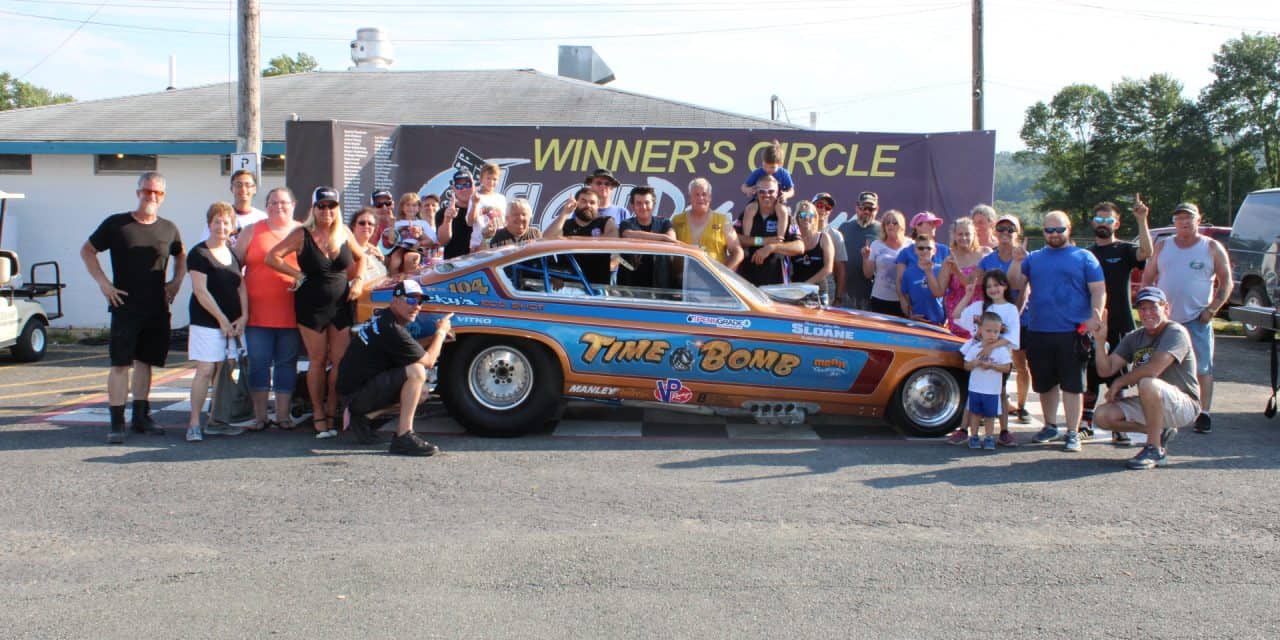 The year was 1960.  Everybody liked Ike.  The Corvair was new and not yet “unsafe at any speed”.  Vietnam was not in the general public’s conscience.  Phones were attached to wires and complex math problems were done with a slide rule.  Then one day the quiet country of Great Meadows was shattered by the sounds of roaring engines and burning rubber as Island Dragway held its first race. Carved out of the rich black ground left behind by the Ice Age, an asphalt playground emerged that few would have thought would still be around and hosting races almost six decades later.  Yet, here we are, celebrating fifty-nine years of continuous operation and continuing the tradition of family friendly and safety oriented drag racing.  And the anniversary weekend turned out about as best one could hope with excellent weather and great race cars, and a forest of fiberglass floppers that put on a terrific show for the fans.

Saturday’s program featured bracket races for the coveted Wally trophy and that always means a hotly contested event.  Sunday brought out the nostalgia racers and the circuit cars of NETO. MANDRA and the East Coast Gassers to augment the dazzling display of nostalgia Funny Cars.  Working backward, the floppers put on quite a show with long, smoky burnouts, dry hops to the starting line and fast and furious dashes to the finish line. And some of those dashes were in less than a straight line.  With over a dozen and a half of plastic speedsters, the fastest of the day honors fell to the stable owner of a host of nostalgia funny cars,  Rocky Pirrone.  Driving his Super Camaro, Pirrone laid down a best speed mark of 207.56 mph with the blown alcohol burner.  He also set the elapsed time mark at 6.662 seconds don the same pass.  There were other terrific passes laid down such as 200.02 ticket for the Time Bomb Vega of Rocky Roxlau, driven by Bob Toth.  And Jon Wall, at the wheel of his Fireball Monza, cranked out a top end charge of 203.09.  Other top speed marks were collected by the likes of Joe Morrison in the Frantic Ford Mustang and Jami Russell’s Iron Outlaw machine  that ran in the high 190s.  Fuel burners contributed to the cackle and funk as the Wild and Crazy Mustang of Chuck Exton and the Bits and Pieces Pontiac of Keith Davidson added to the old-time atmosphere of funny car racing, that included some wild slalom type maneuvers as they traveled the quarter mile.  Anyone who didn’t get their fix  of fast cars and flashbacks must have lost their pulse for a time.

Now picking up the rest of Sunday’s action, NETO Nostalgia class went to the Ford Maverick of Gerard Diemer when he defeated the old Falcon wagon driven by Christian Huebner.  Huebner fouled out his 11.05, 121.28 effort as Diemer gathered in the trophy at 10.11 and 121.19.  Comp eliminator saw a repeat of the Saturday final as club president Brian English put his Camaro through the traps first on an 8.70, 153.72 that pushed Mike Grafos and his Vega to runner-up at 8.55, 155.15.  Bob English raced his Jaguar to the MANDRA title when he bested Randy Campbell’s Austin roadster, 8.907 and 151 to a losing 10.43 matm120. And Jim Wheeler took the East Coast Gasser win in his 64 Nova in a final round besting of Dennis Stewart’s 48 Anglia.  Wheeler knocked out a 10.83, 122 for the light and left the 9.50, 139 pass by Stewart as second best.

Track class winners were Rich Ferrara’s Fairlane over Paul Crispyn’s Dart in Nost. 1, 8.53, 160 versus a 10.08, 134.  Nost 2 was taken by John Dickson over Jim Trommelen when the Nova hit a 12.18 time at a slowing 84 mph when Trommelen’s AMC Spirit ran into trouble and coasted to an 18.25 run.  Thomas Warren was the champ in Nost. 3 in his GMC entry.  And Mitch Speert won the Modern Muscle division over Connie Wackermann when Wackermann fouled out and shut down her Camaro as Speert’s Mustang recorded a 14.28, 99/27 ticket.

Saturday featured the annual NHRA.TV challenge with the special Wally trophies going to the winners.  Richie Williams and his Chevelle won his second straight Super Pro title when he held off the dragster of Dave Hebig for the win, 7.76 and 129.55 standing up against a too quick 7.53 and 135.52.  A pair of Monte Carlos raced for Pro bracket supremacy as Rob Zetterberg squared off with Chris Cassidy.  Leaving almost dead even  the tree, Zetterberg made a come from behind victory pass on a 9.48 at 140.36 that nipped Cassidy’s 9.70 and 135.18 effort.

Struggling for much of the year, Bill Hakucsa  is starting to get his groove back and moved up on the points chart with a Sportsman  victory when he defeated another former track champ, Steve Baker.  This pair left on identical reaction times and neither dared lift at the big end making for a great final.  Hakucsa barely hung on to the light at 11.70, 117.46 that shoved Baker slightly under his dial with an 11.89 at 110.02.  The Bike points started off the day with Barry Stephens holding a one round lead over Division One defending champ Don Hookway. That made each round very valuable as the pair fought to put some distance on the other.  As it turned out, Hookway exited in the first round and Stephens went to the final against Scott McGrath.  McGrath prevented Stephens from doing any more damage when the Busa rider clocked in at 9.07 and 139.40 as the Suzuki fell on a time of 9.75 and a speed of 123.73.

Bobby Pip ran solo for the Trophy honors.  Robbie Boyd took Consolation One over a red lighting John Graziano and Bill VanGoor was better than Craig Sonderfan for the Consolation Two payout.

NETO Comp had Brian English and Mick Grafos paired off, the same duo as the Sunday finale, and with the same result.  And 8.72, 155 run put on the light for English over Grafos’ 8.65, 153.68.  METO Nostalgia bracket was owned by Frank Martinez and his Maverick when Lou Tarascio’s Camaro wasted a perfect reaction time by running under the dial by a .001 margin, 10.499 and 125.99.  Martinez moved to the King of NETO race with English via his 10.68, 125.04.  English made a clean sweep of the weekend in NETO by winning both days’ eliminations and the defeating Martinez in the winner take all runoff forking of NETO and a Wally.

So fifty-nine years of racing in Great Meadows is in the books and already we begin to look toward the sixtieth anniversary just one year away.  For almost six decades, Island Dragway has attempted to provide a family fun atmosphere for fans and racers alike.  Now being operated by the third generation of the same family, the management and staff of Island Dragway  sincerely hope we have been able to provide you with a safe and entertaining venue to pursue your need for speed, and we look forward to continuing that legacy far into the future. Thank you all for your patronage for all these years, and we look toward many more times when we can say, ladies and gentlemen, welcome to Island Dragway.